The Bible as Procession# 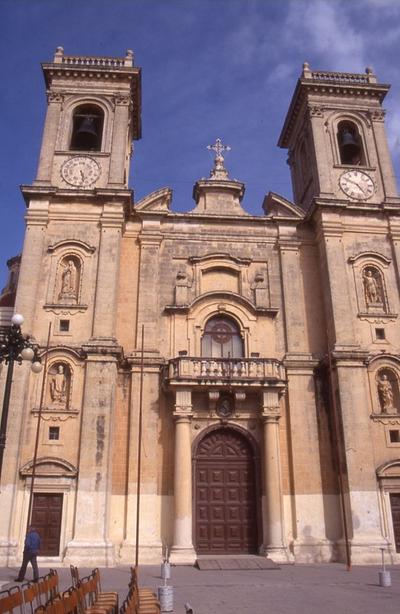 The group of islands of Malta Malta is some 80 SW of Sicily. After Vatican state, Monaco and Liechtenstein it is the fourth largest of the small European states. Its three islands: Malta, Gozo/Ghawdex and Comino/Kemmuna are inhabited by 430.000 people, resulting in an incredible 1346 persons per km².

The history of Malta whose inhabitants are 98% catholics is one of the most colourful in the Mediterranean area. As seat of the international Order of the Knights of Malta who were forced to leave the holy land it was also a bastion against Islam and its warships. Even during the second world war, when Malta was a British colony, it was like a huge aircraft carrieer anchored to the ocean ground: Italian and German attacks by bombing planes were fought off and indeed many bombing raids of the allied forces against Austria originated on Malta.

Maltese is not an indogermanic language, but an ancient north-African-Arabic dialect, i.e. belongs to the semitic language family. The roman-catholic faith has assured that Malta has retained piety and many religious tradititons that one cannot find in a similar variety in continental Europe. This includes game-like traditions like incredibly ornate processions involving many participatns, particurlarly in the Passion Week preceding Easter, but also expressed in the rich culture of displays of nativity scenes before Christmas.

It is said that Malta has 365 churches, i.e. one for each day of the year. This may be an exaggeration, but there are indeed incredibly many. Some 50 parishes do an impressive job preparing for festivals and processions with all the prerequisites of planning and working on costumes and decoration that comes with it. Malta is small, yet has two dioceses, one for the main island and one for Gozo. The palaces and churches of the Order of the Knights of Malta with its treasures of pictures, sculptures and other pieces of art (like pietra dura works, i.e. mosaics in Florentine style) are part of the UNESCO world heritage of this state.

The Passion Week or Holy Week ("semana santa") (maltesisch: gimgha l’kbira „the big week“) has its culmination on Good Friday, the day of the ordeal and death of Jesus Christ. Only in Malta, in southern Italy and in Anadalusia the tradition has remained to re-enact this important day in huge passion-play processions.

In other countries, like in Austria, such passion-play-like processions have been forbidden since the 18 th century as part of the era of "enlightenment".

In Malta one can still find them in a number of places, but the ones in Mosta, Birgu, Qormi and Zebugg are particularly spectacular.

In the picture sequence shown we follow the procession in Zebbug, a village of some 11.000 people: It seems that a good part of the population participates actively in the procession one way or another, "playing" the whole story from the Old Testament up to the ordeal and death of Jesus Christ with seriousness and dignity. Thousands of spectators stay for full duration of the procession, a matter of a few hours.

The atmosphere of the procession is created by groups of persons, by individuals with their attributes and by a number of stages that are carried by strong men with live-size sculptures involved in the biblical story. A large number of man are dressed up as Roman soldiers or legionaries and in a way structure the processions. Children are carrying flags or banners with explanations either in Maltese or particularly colourful versions in Latin.

The procession starts with funeral marches played by local bands. Then ratchets used in the towers of the churches create quite a level of noise throughout the procession, since bells are not allowed to ring (they are supposed to have flown to Rome and only come back on Easter Sunday, to celebrate the resurrection of Jesus).

The door of the church opens and for hours group after group emerges from the church to create the processions.

The impression is overpowering.