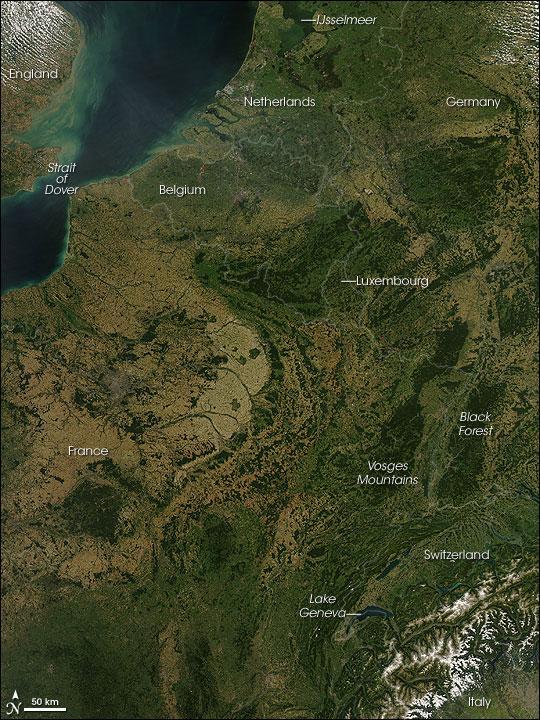 Photo courtesy of NASA., under PD
A rare cloud-free view of a wide area of Western Europe. This Aqua satellite image was captured on 30 August 2008. Skies were clear from the Netherlands in the north to Italy in the south, revealing several of Europes famous natural and man-made features.

A few small fires (marked with red dots) were detected, as well. A pair of geologically matching mountain ranges appear at the border of France and Germany, covered in dark green forests. Frances Vosges and Germanys Black Forest rise on either side of the Rhine River Valley.

The valley in that area is known to geologists as the Rhine Graben; a graben is an elongated block of Earths crust that has sunk relative to surrounding blocks. To the south, the snow-covered Alps create an arcing boundary between Switzerland and Italy.

Near the bottom right of the image, one of the largest lakes in Europe, Lake Geneva (formally known as Lac Leman), fills a glacier-carved valley in western Switzerland. This natural lake occurs on the Rhone River, upstream of where it makes a sharp southward bend as it leaves the Alps.

At the northern edge of the image is a larger, artificial lake: the Netherlands IJsselmeer. Despite its closeness to the North Sea, IJsselmeer is a freshwater lake. It was originally a saltwater inlet at the mouth of the IJssel River, but in the early 1930s, the Dutch built a dike across the inlet.

The freshwater flow of the IJssel River flushed out the seawater, forming the new lake.