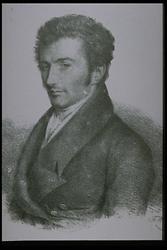 Along with Franz Schubert's ''Erlkoenig'' the composition of the same text by his friend, Anselm Huettenbrenner (1794 - Graz - 1868; Picture) shouldn't be forgotten. (It should be noted that Goethe's ballad was one of the most popular texts to be set to music - ca 130 identified compositions.) In contrast to Schubert's version, which achieves perfect unity of text and musical structure, Huettenbrenner's is much less dramatic. Although he also composes the text as a whole (not strophically), he loses tension with long interludes and numerous repetitions. In his defense, however, it must be said that the Erlkoenig among his earlier compositions out of the 250 some songs he eventually wrote, Huettenbrenner wrote this version in 1829. (E. Stadler)