Fatty George: Struttin´ With Some Barbecue# 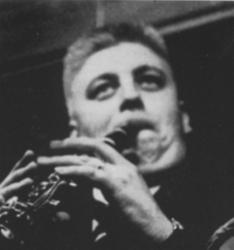 When he opened his own Jazz club Fatty´s Saloon in the center of Vienna, a new phase in the life of the clarinetist, Fatty George (Franz Georg Pressler, 1927 - Vienna - 1982) began. Shortly thereafter (1959), his programs became quickly popular as the result of radio advertising. His unmistakeable style was enthusiastically received as swinging Mainstream Jazz, as an Austrian synthesis of international Jazz streams. The illustration shows Fatty George as a musician; the musical example presents an original recording of Struttin´ With Some Barbecue and lets you hear something of the typical Saloon atmosphere - suggested by certain sounds, rhythms and melodies -, which fascinated the audiences of the 60's. (M. Saary)