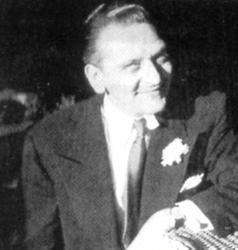 As the son of a Viennese operetta tenor, Frederick Loewe (1901 Vienna - 1988 Palm Springs/U.S.A.) already sold 1 million copies of his hit-song Kathrin, when he was just 15 years old. Later it was his dream to create an American equivalent to the Fledermaus, which he achieved with the Musical My Fair Lady (1958) by creating a synthesis of American and European sound with audience-pleasing wit (Example, Excerpt from the Overture) and made him incredibly popular. His melodious musical lines and easy mastery of the classical Musical (where, as in films, music is toned down in places where the show requires the full attention of the audience) bear witness to his professionalism which sometimes aroused jealousies. (M. Saary)