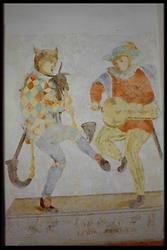 Musician on the left: The bagpipe was a very popular instrument in the Middle Ages but by the 16th c. it was considered worthy only of shepherds and farmers. In the 17th and 18th c. it was again a popular and accepted instrument. Its typical sound is created by the kind of pipes it uses, as well as a drone (i.e. several pipes on one unchanging tone that is constantly played under the actual melody). Another part of its typical sound stems from the fact that the air that plays the pipes is provided mechanically, i.e. not directly from the player but by a windbag, so that the player cannot influence the tone. This means that he usually plays a long, richly embellished series of melodies without phrasing.

The hurdy-gurdy was a respected instrument in churches and monasteries in the 12th to 14th c, and was also popular with travelling musicians. It became the instrument of beggars and blind people because it was easy to play, helping it to survive over the centuries. Both of these instruments were the quintessence of peasant music in the Baroque period (in the 19th c, the term used was Folkmusic ). The illustration shows a fresco (ca 1680) in Soeding castle (Styria). (E. Stadler)