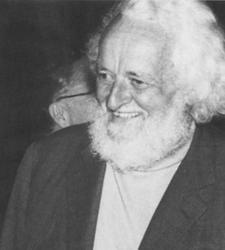 Gottfried von Einem's (1918 Bern/Switzerland - 1996 Vienna) presence in public musical life and his cosmopolitan activities for peace left their mark on the cultural history of the 20th c. An die Nachgeborenen (For Future Generations)(1973) op.42, in 7 movements, is proof of his impact since it was commissioned by the United Nations. His main compositional goal in the work is to efficiently present the contents of the texts with all possible means but this meant neither abandoning tonality nor doing without effective dodecaphonic writing. Polyphony in the spirit of historical sacred art, archaic elements with ostinato, romantic spirit and the effective use of timbre (Example) in an orchestra that concentrates on accompaniment are his stylistic elements. Einem's organisational principle is symmetry. (M. Saary)