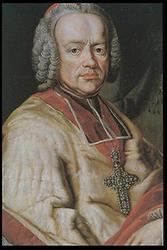 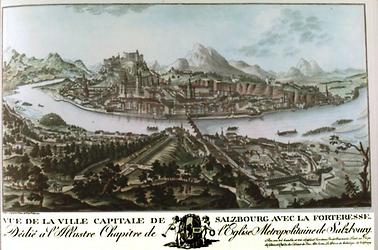 engraving of Salzburg at that time period

In 1724 Johann Ernst Eberlin (1702 Jettingen/Deutschland - 1762 Salzburg) came to Salzburg and became a teacher as well as a friend to Leopold Mozart and Anton C. Adlgasser.

He worked as the bandmaster of the archbishop's church of Sigismund Graf Schrattenbach, to whom this composition is dedicated. The aria of Klotildis comes from the drama Sigismundus. These kinds of scenic school-drama were used by Jesuits as well as Benedictines to present their ideals of education to the youth.

The left image shows the dedicatee Sigismund of Schrattenbach. .