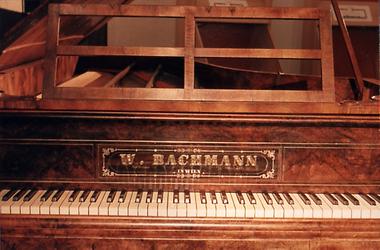 Johannes Brahms (1833 Hamburg/Germany - 1897 Vienna) probably wrote his op 117 in 1892. Although he only wrote it down in that year during a summer vacation in Bad Ischl/Upper Austria, he had probably been working on it mentally for some time.

The musical example, Intermezzo op. 117/1, seems to remind us of the slow movements from his early sonatas but since it is based on a Scottish folksong (Wiegenlied einer ungluecklichen Mutter aus Herders Volksliedern) (Lullaby of an unhappy mother), it clearly belongs to his late period. He told Rudolf von der Leyen that the work was the Wiegenlied meiner Schmerzen (Lullaby of my sufferings).

The picture shows the grand piano made by the Viennese master piano builder, Wilhelm Bachmann, which Brahms used regularly during his summer holidays in Muerzzuschlag in 1884 and 1885. (E. Stadler)