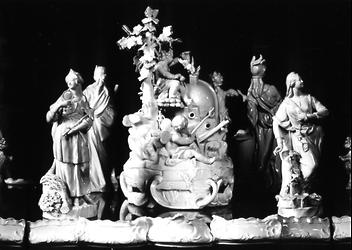 Joseph Haydn (1732 Rohrau/Lower Austria - 1809 Vienna) composed the Applausus for Abbot Rainer Kollmann's .golden anniversary of becoming a priest on commission by the Zwettl Monastery in 1768. This composition shows close affinities to a table decoration (Picture) that was also presented to the Abbot on this occasion. The four cardinal virtues (Temperantia, Prudentia, Justitia und Fortitudo) and Theology are expressed both with music and with sculptures. Since Haydn couldn't be there for the performance, he wrote a famous letter containing directions about how to perform the work. He also had the work copied for himself because he felt it souldn't be performed just once and then forgotten. He later used the music in several smaller church works. (E. Stadler)