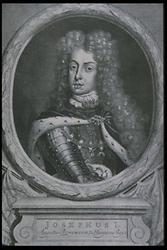 Emperor Leopold I (1640 - Wien - 1705) ruled from 1658 to 1705, although he was originally supposed to follow a career in the church as a younger son. As a part of his preparation for that career he received a thoroughly humanistic education which was probably important in developing his love of music. He was not only a good musician but also a good composer, who obviously had proper instruction in this field. He composed the Regina coeli (cf. Joseph I.) in May 1655, leaving the task of writing the accompanying voices to Antonio Bertali. Such a method was common not only for the Emperor but for other contemporary composers too. Leopold's love of music went so far that he ordered his court chapel to perform his favorite works in the room next to where he lay dying. (E. Stadler)