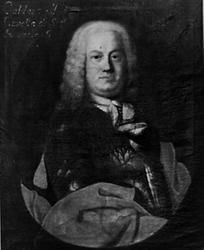 Antonio Caldara (ca 1670 Venice - 1736 Vienna) first applied for the position of vice chapelmaster in Vienna in 1712, probably thinking he had an advantage because of his contacts to Charles during his stay in Spain. However, Charles decided in favor of Johann Joseph Fux. Caldara had to wait until 1717 before he was given this post.

It isn't easy to divide the Trio Sonatas of the Late Baroque into church (sonata da chiesa) or chamber works (sonata da camera). In Italy the differences became more defined in the course of the 17th c, but the mixture of stylistic elements remained quite typical for Austria. The stylistic elements were defined in Italy: a sonata was a group of movements which had contrasting forms, meters, tempi and character. It was common to place the movements in pairs of slow and fast - an order that one could even call "classical." (E. Stadler).