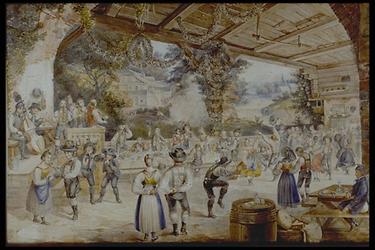 Leopold Mozart (1719 Augsburg/Germany - 1787 Salzburg), the father of Wolfgang Amadeus, was a violinist and vice-chapelmaster at the archepiscopal court in Salzburg. His claim to fame in music history stems mostly from his early encouragement of his son's musical talents. His pedagogical skills are however also evident in his violin school, which he published in 1756. Mozart sen. also composed popular and recommended his son to do the same. His Sinfonia Die Bauernhochzeit (The farmer's wedding) was designed for courtly entertainment as well as for middle-class musical performance. It is particularly characteristic for him to use crude realism, which gave his compositions their popular, carefree character. (E. Stadler)