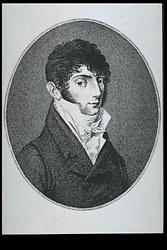 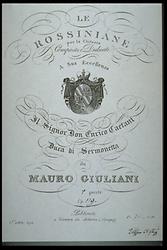 title-page of Giuliani's op. 119 which was published by Artaria in Vienna

The collection of pieces for guitar, Le Rossiniane op. 119-124, by Mauro Giuliani (1781 Barletta - 1829 Naples) are an expression of the so-called Rossini-Fever of his day. Giuliani probably composed these pieces during a stay in Rome in 1820-23, when Gioacchino Rossini was also there, although we don't know if they ever met each other. Le Rossiniane combines Rossini's melodic ingenuity with Giulianis virtuoso guitar style, a surefire combination in the 19th c.

The musical example presents an excerpt from op. 119, a transcription of the Cavatina Languir per una bella from Rossini's L'Italiana in Algeri. (E. Stadler)