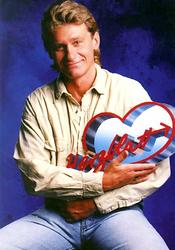 Just a few years after he began an acting career, Rainhard Fendrich (1955 Vienna) began his international career as a singer with the song Strada del Sole (1981) (musical example). It shows his intimate knowledge of the Viennese mentality and the ability to eloquently comment on unacceptable behavior, which is underlined musically. Fendrich (Illustration, Rainhard Fendrich 1996) has managed to fascinate his audience with up-to-date subjects expressed in good songs (for example, 1990 I am from Austria) and even to find access to Serious music by working with the Vienna Symphony Orchestra. In the meantime he has been successful in show-business (television programs: Nix is fix, Herzblatt), as the composer of film music and star of the television series Froehlich geschieden (Happily Divorced)(1996). (M. Saary)