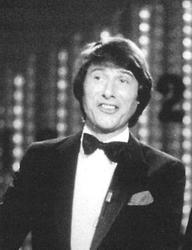 In 1950, just 2 years after he began his musical studies at the Conservatory in Klagenfurt, Udo Juergens (1934 Ottmanach/Carinthia) won the first prize in a composition contest of the Austrian Radio (ORF) for his song, Je t'aime. His continuing success as a composer (Illustration, Udo Juergens as a young man) and performer, (600 compositions and 65 million recordings sold), is the result of his personal style, which reflects the mood of his times and sets high artistic standards. His international breakthrough came in 1966 when he won the Grand Prix d'Eurovision with his song Merci Chérie (Example). With Gershwin as his ideal, he wrote songs for Sammy Davis jr., Sarah Vaughan or Shirley Bassey and lived up to the goal of making his concert audiences happy. (M. Saary)