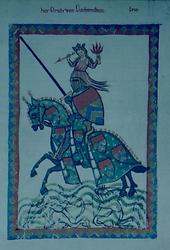 Ulrich von Liechtenstein (around 1200 - 1275) served first as a lord-high-steward (Truchseß), then as the representative of the Duke's provincial judge in Styria. Together with Neidhart and Tannhäuser, he was a representative of a new kind of poetry in the 13th century. The song Süeze doene can be found in his book Frauendienst, which deserves special interest because Ulrich is an active character in it as a Minneritter (Knight of Love) so it is written in the first person singular. Nevertheless this story cannot be seen as an autobiography in the modern sense, since it mixes historical action with fiction. No melodies of Neidhart's songs have survived although there are many indications of the singing of songs, such as in the chapter titles: tanzwise, langiu wise etc.). The miniature used here, like that of Walther, is taken from the Manesse Codex. (E. Stadler)