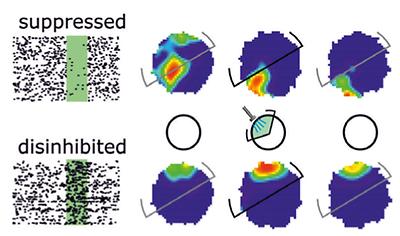 Hippocampal excitatory cells fire in relation to space, and collectively these so-called place cells form an internal cognitive map of space. These hippocampal maps are thought to be updated during learning and in response to changes in the environment through activity-dependent synaptic plasticity. A research paper recently published by IST Austria neuroscientists in the June issue of Nature Communications examines how changes in activity influence spatial coding in rats by using halorhodopsin-mediated, spatially-selective optogenetic silencing. As halorhoposin is expressed in both place cells and inhibitory interneurons, optogenetic stimulation leads to light-induced suppression in many of these cells. However, some place cells were unaffected by light stimulation and some others increased their firing because they received less inhibition from the suppressed inhibitory interneurons.

In their publication with the title “Activity-dependent plasticity of hippocampal place maps” Professor Jozsef Csicsvari and two members of his research group at IST Austria, postdoc Joseph O’Neill and former postdoc Philipp Schoenenberger, find that place fields of the unaffected subpopulation remain stable before, during, and after the optogenetic stimulation. On the other hand, place fields of suppressed place cells are unstable, showing a remapping process across sessions before and after optogenetic inhibition. Disinhibited place cells have stable maps but sustain an elevated firing rate following the stimulation. The findings produced by the IST Austria neuroscientists suggest that place representation in the hippocampus is constantly governed by activity-dependent processes in which suppressing place cell activity can cause lasting changes in their spatial coding. By contrast, increasing the excitability of these cells can cause lasting upregulation of their place-specific firing rates.