Seite - 132 - in The Austrian Business Cycle in the European Context 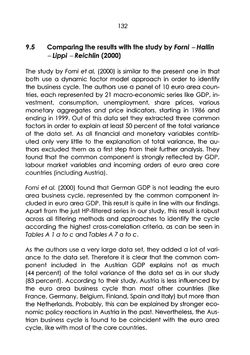 132 9 .5 Comparing the results with the study by Forni - Hallin - Lippi - Reichlin (2000) The study by Forni et al. (2000) is similar to the present one in that both use a dynamic factor model approach in order to identify the business cycle. The authors use a panel of 10 euro area coun- tries, each represented by 21 macro-economic series like GDP, in- vestment, consumption, unemployment, share prices, various monetary aggregates and price indicators, starting in 1986 and ending in 1999. Out of this data set they extracted three common factors in order to explain at least 50 percent of the total variance of the data set. As all financial and monetary variables contrib- uted only very little to the explanation of total variance, the au- thors excluded them as a first step from their further analysis. They found that the common component is strongly reflected by GDP, labour market variables and incoming orders of euro area core countries (including Austria). Forni et al. (2000) found that German GDP is not leading the euro area business cycle, represented by the common component in- cluded in euro area GDP. This result is quite in line with our findings. Apart from the just HP-filtered series in our study, this result is robust across all filtering methods and approaches to identify the cycle according the highest cross-correlation criteria, as can be seen in Tables A 1 a to c and Tables A 7 a to c. As the authors use a very large data set, they added a lot of vari- ance to the data set. Therefore it is clear that the common com- ponent included in the Austrian GDP explains not as much (44 percent) of the total variance of the data set as in our study (83 percent). According to their study, Austria is less influenced by the euro area business cycle than most other countries (like France, Germany, Belgium, Finland, Spain and Italy) but more than the Netherlands. Probably, this can be explained by stronger eco- nomic policy reactions in Austria in the past. Nevertheless, the Aus- trian business cycle is found to be coincident with the euro area cycle, like with most of the core countries.
zurück zum  Buch The Austrian Business Cycle in the European Context"
The Austrian Business Cycle in the European Context
Forschungsergebnisse der Wirtschaftsuniversitat Wien