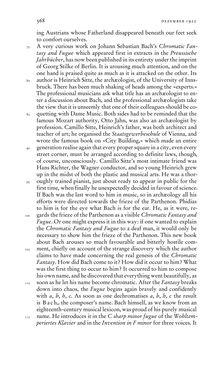 568 dezember 1922 ing Austrians whose Fatherland disappeared beneath our feet seek tocomfortourselves. 75 A very curious work on Johann Sebastian Bach’s Chromatic Fan- tasy and Fugue which appeared first in extracts in the Preussische Jahrbücher,hasnowbeenpublishedinitsentiretyundertheimprint of Georg Stilke of Berlin. It is arousing much attention, and on the one hand is praised quite as much as it is attacked on the other. Its 80 author isHeinrichSitte, thearchæologist,of theUniversityofInns- bruck.Therehasbeenmuchshakingofheadsamongthe»experts.« Theprofessionalmusiciansaskwhat titlehasanarchæologist toen- teradiscussionaboutBach,andtheprofessionalarchæologists take theviewthatit isunseemlythatoneoftheircolleaguesshouldbeco- 85 quetting with Dame Music. Both sides had to be reminded that the famous Mozart authority, Otto Jahn, was also an archæologist by profession. Camillo Sitte, Heinrich’s father, was both architect and teacher of art; he organised the Staatsgewerbeschule of Vienna, and wrote the famous book on »City Building,« which made an entire 90 generationrealiseagainthateverypropersquareinacity,evenevery street corner, must be arranged according to definite laws, though, of course, unconsciously. Camillo Sitte’s most intimate friend was Hans Richter, the Wagner conductor, and so young Heinrich grew up in the midst of both the plastic and musical arts. He was a thor- 95 oughly trained pianist, just about ready to appear in public for the first time,whenfinallyheunexpectedlydecidedinfavourofscience. If Bach was the last word to him in music, so in archæology all his efforts were directed towards the frieze of the Parthenon. Phidias to him is for the eye what Bach is for the ear. He, as it were, re- 100 gardsthefriezeoftheParthenonasavisibleChromaticFantasyand Fugue.Oronemightexpress it inthisway: ifonewantedtoexplain the Chromatic Fantasy and Fugue to a deaf man, it would only be necessary to show him the frieze of the Parthenon. This new book about Bach arouses so much favourable and bitterly hostile com- 105 ment, chiefly on account of the strange discovery which the author claims to have made concerning the real genesis of the Chromatic Fantasy.HowdidBachcometoit?Howdiditoccurtohim?What was the first thing to occur to him? It occurred to him to compose hisownname,andhediscoveredthateverythingwentbeautifully,as 110 soonashe lethisnamebecomechromatic.After theFantasybreaks down into chaos, the Fugue begins again bravely and confidently with a, b, h, c. As soon as one dechromatises a, b, h, c the result is Bach,i the composer’s name. Bach himself, as we know from an eighteenth-centurymusicallexicon,wasproudofhispurelymusical 115 name. He introduces it in the C sharp minor fugue of the Wohltem- periertesKlavierandintheInvention inFminor for threevoices. It
zurück zum  Buch Arthur Schnitzler & Hermann Bahr - Briefwechsel, Aufzeichnungen, Dokumente 1891–1931"
Arthur Schnitzler & Hermann Bahr Briefwechsel, Aufzeichnungen, Dokumente 1891–1931