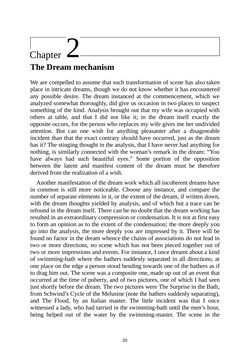 2Chapter The Dream mechanism We are compelled to assume that such transformation of scene has also taken place in intricate dreams, though we do not know whether it has encountered any possible desire. The dream instanced at the commencement, which we analyzed somewhat thoroughly, did give us occasion in two places to suspect something of the kind. Analysis brought out that my wife was occupied with others at table, and that I did not like it; in the dream itself exactly the opposite occurs, for the person who replaces my wife gives me her undivided attention. But can one wish for anything pleasanter after a disagreeable incident than that the exact contrary should have occurred, just as the dream has it? The stinging thought in the analysis, that I have never had anything for nothing, is similarly connected with the woman’s remark in the dream: “You have always had such beautiful eyes.” Some portion of the opposition between the latent and manifest content of the dream must be therefore derived from the realization of a wish. Another manifestation of the dream work which all incoherent dreams have in common is still more noticeable. Choose any instance, and compare the number of separate elements in it, or the extent of the dream, if written down, with the dream thoughts yielded by analysis, and of which but a trace can be refound in the dream itself. There can be no doubt that the dream working has resulted in an extraordinary compression or condensation. It is not at first easy to form an opinion as to the extent of the condensation; the more deeply you go into the analysis, the more deeply you are impressed by it. There will be found no factor in the dream whence the chains of associations do not lead in two or more directions, no scene which has not been pieced together out of two or more impressions and events. For instance, I once dreamt about a kind of swimming-bath where the bathers suddenly separated in all directions; at one place on the edge a person stood bending towards one of the bathers as if to drag him out. The scene was a composite one, made up out of an event that occurred at the time of puberty, and of two pictures, one of which I had seen just shortly before the dream. The two pictures were The Surprise in the Bath, from Schwind’s Cycle of the Melusine (note the bathers suddenly separating), and The Flood, by an Italian master. The little incident was that I once witnessed a lady, who had tarried in the swimming-bath until the men’s hour, being helped out of the water by the swimming-master. The scene in the 20
zurück zum  Buch Dream Psychology"
Dream Psychology