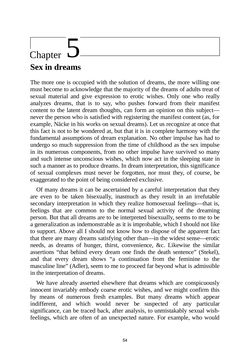 5Chapter Sex in dreams The more one is occupied with the solution of dreams, the more willing one must become to acknowledge that the majority of the dreams of adults treat of sexual material and give expression to erotic wishes. Only one who really analyzes dreams, that is to say, who pushes forward from their manifest content to the latent dream thoughts, can form an opinion on this subject— never the person who is satisfied with registering the manifest content (as, for example, Näcke in his works on sexual dreams). Let us recognize at once that this fact is not to be wondered at, but that it is in complete harmony with the fundamental assumptions of dream explanation. No other impulse has had to undergo so much suppression from the time of childhood as the sex impulse in its numerous components, from no other impulse have survived so many and such intense unconscious wishes, which now act in the sleeping state in such a manner as to produce dreams. In dream interpretation, this significance of sexual complexes must never be forgotten, nor must they, of course, be exaggerated to the point of being considered exclusive. Of many dreams it can be ascertained by a careful interpretation that they are even to be taken bisexually, inasmuch as they result in an irrefutable secondary interpretation in which they realize homosexual feelings—that is, feelings that are common to the normal sexual activity of the dreaming person. But that all dreams are to be interpreted bisexually, seems to me to be a generalization as indemonstrable as it is improbable, which I should not like to support. Above all I should not know how to dispose of the apparent fact that there are many dreams satisfying other than—in the widest sense—erotic needs, as dreams of hunger, thirst, convenience, &c. Likewise the similar assertions “that behind every dream one finds the death sentence” (Stekel), and that every dream shows “a continuation from the feminine to the masculine line” (Adler), seem to me to proceed far beyond what is admissible in the interpretation of dreams. We have already asserted elsewhere that dreams which are conspicuously innocent invariably embody coarse erotic wishes, and we might confirm this by means of numerous fresh examples. But many dreams which appear indifferent, and which would never be suspected of any particular significance, can be traced back, after analysis, to unmistakably sexual wish- feelings, which are often of an unexpected nature. For example, who would 54
zurück zum  Buch Dream Psychology"
Dream Psychology