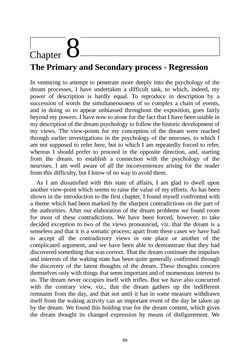 8Chapter The Primary and Secondary process - Regression In venturing to attempt to penetrate more deeply into the psychology of the dream processes, I have undertaken a difficult task, to which, indeed, my power of description is hardly equal. To reproduce in description by a succession of words the simultaneousness of so complex a chain of events, and in doing so to appear unbiassed throughout the exposition, goes fairly beyond my powers. I have now to atone for the fact that I have been unable in my description of the dream psychology to follow the historic development of my views. The view-points for my conception of the dream were reached through earlier investigations in the psychology of the neuroses, to which I am not supposed to refer here, but to which I am repeatedly forced to refer, whereas I should prefer to proceed in the opposite direction, and, starting from the dream, to establish a connection with the psychology of the neuroses. I am well aware of all the inconveniences arising for the reader from this difficulty, but I know of no way to avoid them. As I am dissatisfied with this state of affairs, I am glad to dwell upon another view-point which seems to raise the value of my efforts. As has been shown in the introduction to the first chapter, I found myself confronted with a theme which had been marked by the sharpest contradictions on the part of the authorities. After our elaboration of the dream problems we found room for most of these contradictions. We have been forced, however, to take decided exception to two of the views pronounced, viz. that the dream is a senseless and that it is a somatic process; apart from these cases we have had to accept all the contradictory views in one place or another of the complicated argument, and we have been able to demonstrate that they had discovered something that was correct. That the dream continues the impulses and interests of the waking state has been quite generally confirmed through the discovery of the latent thoughts of the dream. These thoughts concern themselves only with things that seem important and of momentous interest to us. The dream never occupies itself with trifles. But we have also concurred with the contrary view, viz., that the dream gathers up the indifferent remnants from the day, and that not until it has in some measure withdrawn itself from the waking activity can an important event of the day be taken up by the dream. We found this holding true for the dream content, which gives the dream thought its changed expression by means of disfigurement. We 89
zurück zum  Buch Dream Psychology"
Dream Psychology