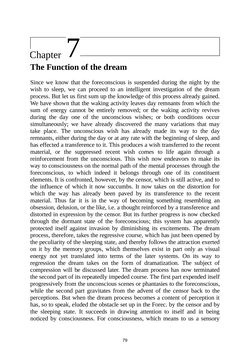 7Chapter The Function of the dream Since we know that the foreconscious is suspended during the night by the wish to sleep, we can proceed to an intelligent investigation of the dream process. But let us first sum up the knowledge of this process already gained. We have shown that the waking activity leaves day remnants from which the sum of energy cannot be entirely removed; or the waking activity revives during the day one of the unconscious wishes; or both conditions occur simultaneously; we have already discovered the many variations that may take place. The unconscious wish has already made its way to the day remnants, either during the day or at any rate with the beginning of sleep, and has effected a transference to it. This produces a wish transferred to the recent material, or the suppressed recent wish comes to life again through a reinforcement from the unconscious. This wish now endeavors to make its way to consciousness on the normal path of the mental processes through the foreconscious, to which indeed it belongs through one of its constituent elements. It is confronted, however, by the censor, which is still active, and to the influence of which it now succumbs. It now takes on the distortion for which the way has already been paved by its transference to the recent material. Thus far it is in the way of becoming something resembling an obsession, delusion, or the like, i.e. a thought reinforced by a transference and distorted in expression by the censor. But its further progress is now checked through the dormant state of the foreconscious; this system has apparently protected itself against invasion by diminishing its excitements. The dream process, therefore, takes the regressive course, which has just been opened by the peculiarity of the sleeping state, and thereby follows the attraction exerted on it by the memory groups, which themselves exist in part only as visual energy not yet translated into terms of the later systems. On its way to regression the dream takes on the form of dramatization. The subject of compression will be discussed later. The dream process has now terminated the second part of its repeatedly impeded course. The first part expended itself progressively from the unconscious scenes or phantasies to the foreconscious, while the second part gravitates from the advent of the censor back to the perceptions. But when the dream process becomes a content of perception it has, so to speak, eluded the obstacle set up in the Forec. by the censor and by the sleeping state. It succeeds in drawing attention to itself and in being noticed by consciousness. For consciousness, which means to us a sensory 79
zurück zum  Buch Dream Psychology"
Dream Psychology