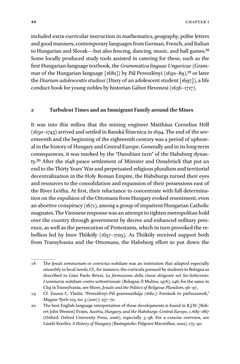 Chapter 144 included extra-curricular instruction in mathematics, geography, polite letters and good manners, contemporary languages from German, French, and Italian to Hungarian and Slovak—but also fencing, dancing, music, and ball games.18 Some locally produced study tools assisted in catering for these, such as the first Hungarian-language textbook, the Grammatica linguae Ungaricae (Gram- mar of the Hungarian language [1682]) by Pál Pereszlényi (1630–89),19 or later the Diarium adolescentis studiosi (Diary of an adolescent student [1697]), a life conduct book for young nobles by historian Gábor Hevenesi (1656–1717). 2 Turbulent Times and an Immigrant Family around the Mines It was into this milieu that the mining engineer Matthäus Cornelius Höll (1650–1743) arrived and settled in Banská Štiavnica in 1694. The end of the sev- enteenth and the beginning of the eighteenth century was a period of upheav- al in the history of Hungary and Central Europe. Generally and in its long-term consequences, it was marked by the “Danubian turn” of the Habsburg dynas- ty.20 After the 1648 peace settlement of Münster and Osnabrück that put an end to the Thirty Years’ War and perpetuated religious pluralism and territorial decentralization in the Holy Roman Empire, the Habsburgs turned their eyes and resources to the consolidation and expansion of their possessions east of the River Leitha. At first, their reluctance to concentrate with full determina- tion on the expulsion of the Ottomans from Hungary evoked resentment, even an abortive conspiracy (1671), among a group of impatient Hungarian Catholic magnates. The Viennese response was an attempt to tighten metropolitan hold over the country through government by decree and enhanced military pres- ence, as well as the persecution of Protestants, which in turn provoked the re- bellion led by Imre Thököly (1657–1705). As Thököly received support both from Transylvania and the Ottomans, the Habsburg effort to put down the 18 The Jesuit seminarium or convictus nobilium was an institution that adapted especially smoothly to local needs. Cf., for instance, the curricula pursued by students in Bologna as described in Gian Paolo Brizzi, La formazione della classe dirigente nel Sei-Settecento: I seminaria nobilium centro-settentrionale (Bologna: Il Mulino, 1976), 246; for the same in Cluj in Transylvania, see Shore, Jesuits and the Politics of Religious Pluralism, 96–97. 19 Cf. Zsuzsa C. Vladár, “Pereszlényi Pál grammatikája (1682.): Források és párhuzamok,” Magyar Nyelv 103, no. 3 (2007): 257–70. 20 The best English-language interpretation of these developments is found in R.J.W. [Rob- ert John Weston] Evans, Austria, Hungary, and the Habsburgs: Central Europe, c.1683–1867 (Oxford: Oxford University Press, 2006), especially 3–98. For a concise overview, see László Kontler, A History of Hungary (Basingstoke: Palgrave Macmillan, 2002), 175–90.
zurück zum  Buch Maximilian Hell (1720–92) - And the Ends of Jesuit Science in Enlightenment Europe"
Maximilian Hell (1720–92) And the Ends of Jesuit Science in Enlightenment Europe