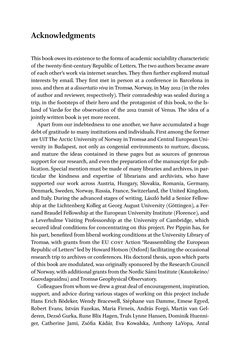 Acknowledgments This book owes its existence to the forms of academic sociability characteristic of the twenty-first-century Republic of Letters. The two authors became aware of each other’s work via internet searches. They then further explored mutual interests by email. They first met in person at a conference in Barcelona in 2010, and then at a dissertatio viva in Tromsø, Norway, in May 2012 (in the roles of author and reviewer, respectively). Their comradeship was sealed during a trip, in the footsteps of their hero and the protagonist of this book, to the Is- land of Vardø for the observation of the 2012 transit of Venus. The idea of a jointly written book is yet more recent. Apart from our indebtedness to one another, we have accumulated a huge debt of gratitude to many institutions and individuals. First among the former are UiT The Arctic University of Norway in Tromsø and Central European Uni- versity in Budapest, not only as congenial environments to nurture, discuss, and mature the ideas contained in these pages but as sources of generous support for our research, and even the preparation of the manuscript for pub- lication. Special mention must be made of many libraries and archives, in par- ticular the kindness and expertise of librarians and archivists, who have supported our work across Austria, Hungary, Slovakia, Romania, Germany, Denmark, Sweden, Norway, Russia, France, Switzerland, the United Kingdom, and Italy. During the advanced stages of writing, László held a Senior Fellow- ship at the Lichtenberg Kolleg at Georg August University (Göttingen), a Fer- nand Braudel Fellowship at the European University Institute (Florence), and a Leverhulme Visiting Professorship at the University of Cambridge, which secured ideal conditions for concentrating on this project. Per Pippin has, for his part, benefited from liberal working conditions at the University Library of Tromsø, with grants from the EU COST Action “Reassembling the European Republic of Letters” led by Howard Hotson (Oxford) facilitating the occasional research trip to archives or conferences. His doctoral thesis, upon which parts of this book are modulated, was originally sponsored by the Research Council of Norway, with additional grants from the Nordic Sámi Institute (Kautokeino/ Guovdageaidnu) and Tromsø Geophysical Observatory. Colleagues from whom we drew a great deal of encouragement, inspiration, support, and advice during various stages of working on this project include Hans Erich Bödeker, Wendy Bracewell, Stéphane van Damme, Emese Egyed, Robert Evans, István Fazekas, Maria Firneis, András Forgó, Martin van Gel- deren, Dezső Gurka, Rune Blix Hagen, Truls Lynne Hansen, Dominik Huenni- ger, Catherine Jami, Zsófia Kádár, Eva Kowalska, Anthony LaVopa, Antal
zurück zum  Buch Maximilian Hell (1720–92) - And the Ends of Jesuit Science in Enlightenment Europe"
Maximilian Hell (1720–92) And the Ends of Jesuit Science in Enlightenment Europe