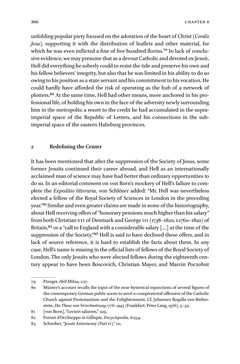 Chapter 8366 unfolding popular piety focused on the adoration of the heart of Christ (Cordis Jesu), supporting it with the distribution of leaflets and other material, for which he was even inflicted a fine of five hundred florins.79 In lack of conclu- sive evidence, we may presume that as a devout Catholic and devoted ex-Jesuit, Hell did everything he soberly could to resist the tide and preserve his own and his fellow believers’ integrity, but also that he was limited in his ability to do so owing to his position as a state servant and his commitment to his vocation. He could hardly have afforded the risk of operating as the hub of a network of plotters.80 At the same time, Hell had other means, more anchored in his pro- fessional life, of holding his own in the face of the adversity newly surrounding him in the metropolis: a resort to the credit he had accumulated in the supra- imperial space of the Republic of Letters, and his connections in the sub- imperial space of the eastern Habsburg provinces. 2 Redefining the Center It has been mentioned that after the suppression of the Society of Jesus, some former Jesuits continued their career abroad, and Hell as an internationally acclaimed man of science may have had better than ordinary opportunities to do so. In an editorial comment on von Born’s mockery of Hell’s failure to com- plete the Expeditio litteraria, von Schlözer added: “Mr. Hell was nevertheless elected a fellow of the Royal Society of Sciences in London in the preceding year.”81 Similar and even greater claims are made in some of the historiography, about Hell receiving offers of “honorary pensions much higher than his salary” from both Christian vii of Denmark and George iii (1738–1820, r.1760–1820) of Britain,82 or a “call to England with a considerable salary […] at the time of the suppression of the Society.”83 Hell is said to have declined these offers, and in lack of source reference, it is hard to establish the facts about them. In any case, Hell’s name is missing in the official lists of fellows of the Royal Society of London. The only Jesuits who were elected fellows during the eighteenth cen- tury appear to have been Boscovich, Christian Mayer, and Marcin Poczobut 79 Pinzger, Hell Miksa, 1:27. 80 Münter’s account recalls the topoi of the near-hysterical injunctions of several figures of the contemporary German public scene to avert a conspiratorial offensive of the Catholic Church against Protestantism and the Enlightenment. Cf. Johannes Rogalla von Bieber- stein, Die These von Verschwörung 1776–1945 (Frankfurt: Peter Lang, 1976), 5–32. 81 [von Born], “Lectori salutem,” 229. 82 Ferrari d’Occhieppo in Gillispie, Encyclopedia, 6:234. 83 Schreiber, “Jesuit Astronomy (Part ii),” 111.
zurück zum  Buch Maximilian Hell (1720–92) - And the Ends of Jesuit Science in Enlightenment Europe"
Maximilian Hell (1720–92) And the Ends of Jesuit Science in Enlightenment Europe