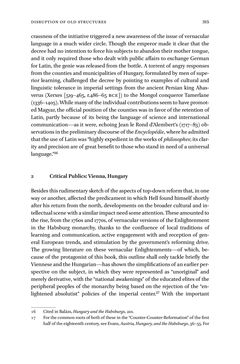 315Disruption of Old Structures crassness of the initiative triggered a new awareness of the issue of vernacular language in a much wider circle. Though the emperor made it clear that the decree had no intention to force his subjects to abandon their mother tongue, and it only required those who dealt with public affairs to exchange German for Latin, the genie was released from the bottle. A torrent of angry responses from the counties and municipalities of Hungary, formulated by men of supe- rior learning, challenged the decree by pointing to examples of cultural and linguistic tolerance in imperial settings from the ancient Persian king Ahas- verus (Xerxes [519–465, r.486–65 bce]) to the Mongol conqueror Tamerlane (1336–1405). While many of the individual contributions seem to have promot- ed Magyar, the official position of the counties was in favor of the retention of Latin, partly because of its being the language of science and international communication—as it were, echoing Jean le Rond d’Alembert’s (1717–83) ob- servations in the preliminary discourse of the Encyclopédie, where he admitted that the use of Latin was “highly expedient in the works of philosophes; its clar- ity and precision are of great benefit to those who stand in need of a universal language.”16 2 Critical Publics: Vienna, Hungary Besides this rudimentary sketch of the aspects of top-down reform that, in one way or another, affected the predicament in which Hell found himself shortly after his return from the north, developments on the broader cultural and in- tellectual scene with a similar impact need some attention. These amounted to the rise, from the 1760s and 1770s, of vernacular versions of the Enlightenment in the Habsburg monarchy, thanks to the confluence of local traditions of learning and communication, active engagement with and reception of gen- eral European trends, and stimulation by the government’s reforming drive. The growing literature on these vernacular Enlightenments—of which, be- cause of the protagonist of this book, this outline shall only tackle briefly the Viennese and the Hungarian—has shown the simplifications of an earlier per- spective on the subject, in which they were represented as “unoriginal” and merely derivative, with the “national awakenings” of the educated elites of the peripheral peoples of the monarchy being based on the rejection of the “en- lightened absolutist” policies of the imperial center.17 With the important 16 Cited in Balázs, Hungary and the Habsburgs, 210. 17 For the common roots of both of these in the “Counter-Counter-Reformation” of the first half of the eighteenth century, see Evans, Austria, Hungary, and the Habsburgs, 36–55. For
zurück zum  Buch Maximilian Hell (1720–92) - And the Ends of Jesuit Science in Enlightenment Europe"
Maximilian Hell (1720–92) And the Ends of Jesuit Science in Enlightenment Europe