by Michaela Schölnberger [1]
Kindly made available by Anton Paar GmbH April 2017, based on an earlier entry in the Paar-Blog

The list of London’s famous landmarks is enormous: Westminster Abbey, Big Ben, St. Paul’s Cathedral, the Tower of London, Tower Bridge, not to forget Harrods – but if you keep moving across the River Thames for as little as a mile, you are about to meet a new London sight that is worth visiting: the Fourpure Brewing Co., a young craft brewery founded in 2013 by two brothers: Daniel and Thomas Lowe.

The name “Fourpure” was chosen with respect to the four core ingredients used: grain, yeast, hops and water. But Fourpure implies much more: motivation and love for the brewers’ craft, a thorough knowledge of brewing, and the strong will to create above-average high-quality beer to make their customers happy and long for more. Fourpure’s permanent product range comprises Pils Lager, American Pale, Session IPA, Shape Shifter IPA, Oatmeal Stout, and Flatiron Red. Most of the beer is sold to local outlets, only some is exported. Fourpure’s beer was a success right from the start, its popularity still increasing. There are many breweries producing beer in different styles, different quantities, and different flavors, but Fourpure clearly stands out: they make the bigger effort!

It is not the output quantity that makes Fourpure a craft brewery, but the attitude, the philosophy, and the privilege to brew the beer that the customers want. “We are interested in making beer on the basis of flavor rather than strict commercial attributes, and we have an eye on keeping our team motivated so they make the best beer they can. Values like respect for the environment are more important than the number of liters or hectoliters when it comes to defining a craft brewery,” states John. Fourpure was the first craft brewery in the UK to package its full core range of beer in cans. Cans not only offer optimum hygiene, but also keep the beer from suffering quality losses, for example from oxygen ingress, and they prove to be much more efficient for reasons of transport, storage and energy usage, as aluminum cans are recycled over and over again. Quality meets innovation

From the very beginning, Daniel and John had an eye on comprehensive quality control. They put a lot of effort in investigating as many relevant beer parameters in-house as possible. Fourpure is one of the first craft breweries to invest in and benefit from the so-called Craft2Craft Package by Anton Paar, a combination of a DMA 35 handheld density meter, see Figure 1, and a CboxQC At-line meter for the simultaneous measurement of dissolved carbon dioxide (CO2) and dissolved oxygen (O2) that also offers an insight into the amount of nitrogen in beer.

CboxQC At-line is used to monitor the dissolved O2 and CO2 contents, in the lab as well as at-line during production, see Figure 2. 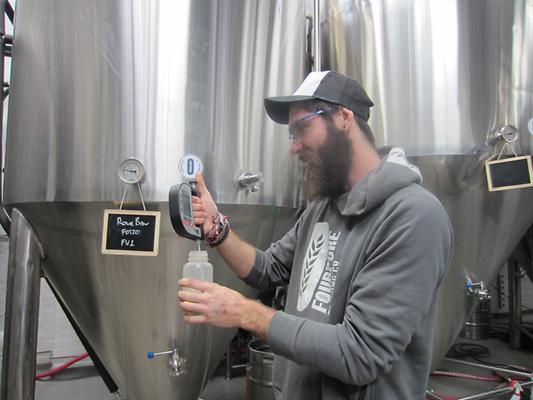 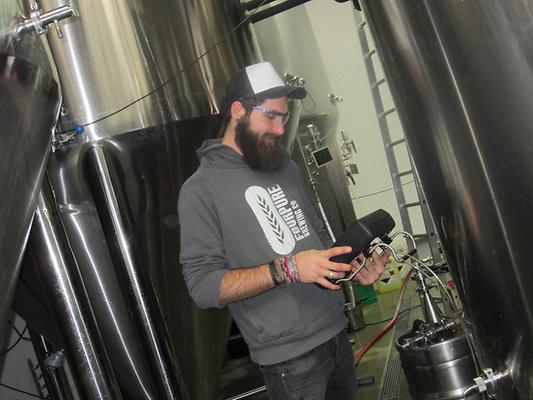 Figure 2: Measuring the dissolved CO2 and O2 contents during production

“CO2 is important for dispense, also for mouth feel, flavors, and aromas,” explains John. From the dissolved O2 content, the total package oxygen is deduced to ensure stable quality during the beer’s specified shelf life.

CboxQC At-line combines two smart measuring principles: the patented Multiple Volume Expansion (MVE) method for determining the true CO2 content without any influence of other dissolved gases such as air, and an optical sensor for the measurement of dissolved O2.

Figure 3 illustrates the working principle of MVE: The measuring chamber is filled with sample and sealed, then the chamber’s volume is expanded twice, and the pressures and temperatures are measured at both volume expansions. Due to their different solubilities, CO2 and air show different behavior which makes it possible to calculate the true amount of dissolved CO2 in the beverage. The result, delivered within one minute, is the true concentration of dissolved CO2 without any influence from dissolved nitrogen, oxygen or air. 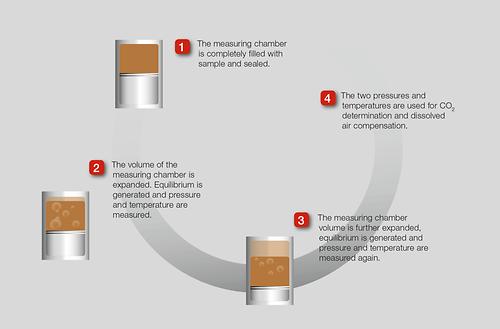 Figure 3: How the MVE method works

The optical oxygen sensor consists of a light source, a light-sensitive layer which is in contact with the sample, and a photodiode plus filter. The dye molecules embedded in the light-sensitive layer absorb light, get transferred to a higher energy level and emit light again. The emission light has a different wavelength which is detected by the photodiode. The less oxygen in the sample (see Figure 4 a), the more light is emitted by the dye. In the presence of O2 (see Figure 4 b), the dye absorbs excitation light but, in its excited state, energy is transferred to O2 molecules. The dye has now less energy left to emit. The detected light is a precise measure of the amount of dissolved oxygen in the sample. 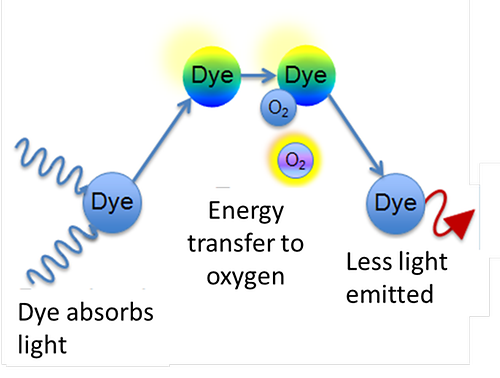 Figure 4 b: Oxygen present in sample

The fact that no chemicals are required makes the optical oxygen sensor particularly ecologically friendly.

The density measurement with DMA 35 is carried out according to the proven oscillating U-tube principle. The measuring cell is a U-shaped glass tube which is filled with sample using a built-in pump. Once filled, the U-tube is electronically excited to oscillate. The oscillation frequency is directly related to the density (see Figure 5 a and Figure 5 b) of the sample and, subsequently, accounts for the sample’s composition such as its extract content. 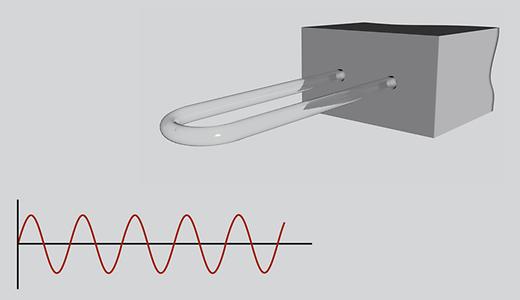 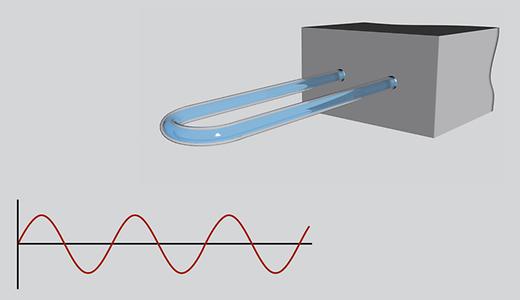 Looking into the tanks#

The fact that CboxQC At-line also contains an oxygen sensor in the same housing led Daniel and John to experiment with the gas atmosphere in their tanks. “We once recorded very low oxygen levels in our beer in the bright beer tank, but some other time we detected much higher oxygen levels. With CboxQC At-line we could locate and eliminate the reason. It was all about the efficacy of the purging procedure,” states John. “This meant an additional use of the instrument for us.”

What is the best time to visit London? A Saturday! If you are planning to come to London make sure that you are around on a Saturday between 11 am and 8 pm because this is the time when Fourpure opens its doors. Walk the extra mile to visit Fourpure, do not miss out!