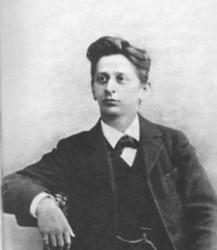 Alexander Zemlinsky's (1871 Vienna -1942 Lurchmont/USA) subtle tonal language was well-received, however, even as the teacher and brother-in-law of Schoenberg, he wasn't in favor of the crass elimination of tonality (cf. A. Berg). His experience in the theatre and as a composer for the stage influenced his approach to his instrumental works, where he adapted some of the aspects of film music such as in the development of the signal theme at the beginning of the Lyrische Symphonie (Lyrical Symphony)(1922). Like Korngold Zemlinsky believed that comprehension and artistic skill didn't need to be opposed to each other and that expanded harmonies could be used as a part of a dramatic concept, in which they could unfold their effectiveness. The illustration shows Zemlinsky as a young man at a time when he enjoyed Mahler's backing. After Mahler quit his position as opera director, Zemlinsky soon left Vienna. (M. Saary)