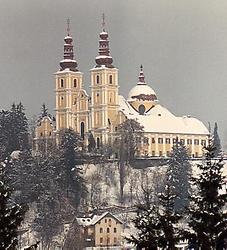 Amand Ivancic lived approximately from 1725 to 1790. The first documentary evidence is from 1751 when he celebrated his first mass as a priest at the Pauliner monastery in Wiener Neustadt/Lower Austria. From 1755 to 1758 he was at the monastery of the pilgrimage church Mariatrost near Graz, but then we lose track of him. His works show that he must have been acquainted with the compositions of his most famous contemporaries. (E. Stadler)

The musical example is the Kyrie from the D major mass. This mass is typical for the times in that it has a mainly concerto-like character.