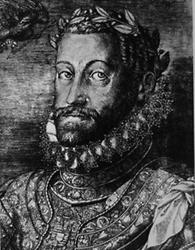 Like many other musicians at Hapsburg courts in this period, Charles Luython (1557/58 Antwerp - 1620 Prague) came from the Low Countries. He served Maximilian II and then Rudolf II starting in 1570 first as a boy singer, then as a chamber musician and finally as court organist. Luython died in poverty because Rudolf's successor, Emperor Matthias, never paid him the pesion that had been promised to him. As a result, he was forced to sell his famous harpsichord which had special keys for sharps and flats as well as a moveable keyboard. Luython's Fuga suavissima for four voices has three parts, each of which is based on a new theme. His treatment of the fugue is masterful but he only introduces virtuoso figurations in the closing sections of each part. The illustration shows Rudolf II. (E. Stadler)