Musical instruments in works of art#

glass window of a wandering minstrel with his fiddle at the feet of Christ on the cross.
© BDA Wien 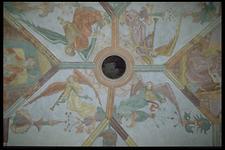 fresco in the parish church of Trofaiach
© Helmut Schubert, Graz 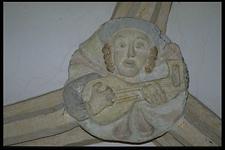 fresco of the parish church of St. Andrae in Thoerl
private ownership

The first picture shows a sculpture on the Romanesque church in Schoengrabern (Lower Austria) (built around 1230 ). It represents the 15th month of the year, which includes the end of the old year and the beginning of a new one (December to January). You can see a monster with a harp on the left and a wheel of fortune on the right. The sculpture is located on the outside south wall of the church. The basic idea is to represent the fall from grace, redemption and the Last Judgement.

The second picture shows a wandering minstrel with his fiddle at the feet of Christ on the cross. This stained glass window is located on the south side of the gothic parish church of the village of Weiten near Melk in Lower Austria and dates back to the 1520's.

In the third and fourth picture two angels that are part of a stained glass window in the Mary Magdalene Church in Judenburg (Styria) are shown holding a portable organ (portative) and a harp (late 15th c.). Although they are seen alone, they most likely belong to the subject of the Coronation of Maria which is shown in the same window. This may be a parallel to the Cherubim and Seraphim who sing the praise of God.

In 1961 a fresco was discovered in the parish church of Trofaiach which was probably created around theyears 1460/70. It shows four angels making music which are clearly separated from each other by the gothic vaulting. Along with the portative (small portable organ), you can see secular instruments such as the lute and trombone (in two sizes and thus indicating tuning). The painter obviously wanted to use "modern" instruments that had only recently come into use in the church.

The sixth picture shows an idealized portrait of Herrand von Wildon with a lute, the symbol of a singer/poet in the Middle Ages. This is the center stone of a gothic arch in the parish church of St. Stephan ob Stainz. Herrand was presumably the son-in-law of the styrian Minnesinger Ulrich von Liechtenstein. His songs are included in the so-called "Manessische Liederhandschrift" (Manessische Song manuschript).

The fresco of the parish church of St. Andrae in Thoerl (Carinthia) was painted by Thomas of Villach (1435/40 - after 1520), an Austrian painter who shows sings of Italian influences. He was the most important fresco and canvas painter of the 2nd half of the 15th c. in Carinthia. This fresco shows two angels with a harp and a lute. (E. Stadler)


Back to the Austrian Version