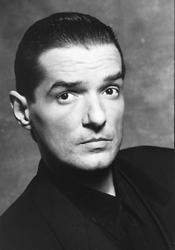 Falco's (1957 Vienna) appearances reflect his flexibility and exude "coolness." A good example is his 1985 hit, Rock me Amadeus, in which he parodies the old Mozart clich‚e by replacing it with a more contemporary Mozart image: the sound of the 80's is interrupted by interspersed staccato vocals of the titleline from the beginning. The song and especially the accompanying video present a tongue-in-cheek view of how Mozart's historic image would be fitted to the demands of contemporary show-business. Later Falco made it to first place on the Italian Hitparade with Kommissar and began an international career. His current single Naked (1996 EMI) reached the Top 10 of the Austrian Top 40 Single Charts and his latest song Egoist connects up with the "old" Falco tradition. (M. Saary)