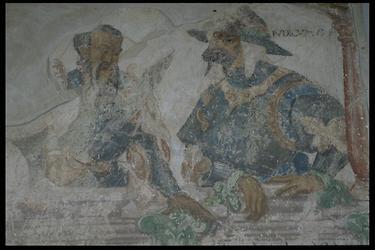 Hans Sachs (1494 - Nuremberg - 1576), a shoemaker, was probably the best-known and most important Meisteringer. The term Meistersinger refers to bourgeois craftsmen in cities during the Late Middle Ages, who tried to maintain the quality and ideals of the alte Lyrik and at the same time to compose and write according to strict self-imposed rules. Part of the realization of their goals was the formation of guilds. The test of a master was inventing his own melody while abiding by the rules. This haowever meant that the natural accentuation was often ignored because a Weis' (melody) was sung to a variety of texts by different poets. Hans Sachs wrote the song, Die drey werckmender to fit his own melody silberweis which was supposedly composed in Braunau am Inn (Upper Austria). The illustration shows a part of the Meistersinger frescoes from the so-called Meistersinger Hall (formerly the courtroom) in Schwaz in the Tyrol (1536). Unfortunately this hall was almost completely destroyed during the Second World War. (E. Stadler)