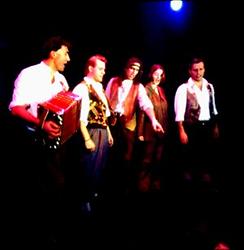 Like any creative artist, who takes folkmusic as the basis of new contents, Hubert von Goisern (Illustration, Hubert von Goisern with the Alpine Cats) attempts to conquer new areas beyond the restrictions of narrow-minded traditionalism. His Alpinkatzen-project, failed at first but made an incredibly successful comeback in 1992 with the pop song Hiatamadl (Example) from the album, Aufgeigen statt Niederschiessen (Make music, not war) in the attempt to fight the powers that resist any change. The combination of modern sound-production with traditional instruments and well-known melodies presented in an exciting stage show not only helped his group achieve popularity but also paved the way for him to write subtle and demanding film music. (M. Saary)