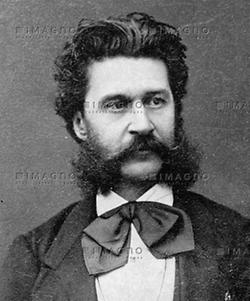 For Johann Strauß; (1825 - Vienna - 1899) styling (the pictures shows Strauss in middle-age) and public image were as important as they are for stars today. His unchanging appearance became a trademark of a culture of discerning entertainment. The society of the 19th century handled crisis situations better if there was also relief in the form of dance, opera and operetta occasionaly with extravagant music and scenery. This waltz from the overture to Fledermaus in particular (1874) demonstrates Strauss' technique of adding ever new themes to his delicate, melodious phrases along with transparent harmonies that also include nuances such as sections in minor keys. Nobody wanted to miss the feeling of apparently never-ending movement in a lighthearted mood. (M. Saary)