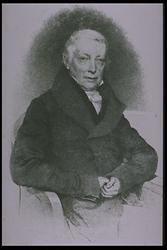 Josef Leopold Edler von Eybler (1765 Schwechat/Lower Austria - 1846 Vienna) broke out of his middle-class origins and achieved musical as well as social success. He was not only a student of Albrechtsberger, but also enjoyed close contacts to Haydn and W. A. Mozart, with whom he was even on friendly terms. In 1824 Emperor Francis I made him his chapelmaster; in 1834 he was ennobled. Eybler was known mainly as the composer of church music. The Offertorium Terra tremuit is part of the Easter Sunday liturgy. The opening words find their musical expression with tremolo figures and dotted notes. Christ's resurrection is represented with an upward-moving chromatic theme, which Eybler then develops in a large fugue. (E. Stadler)