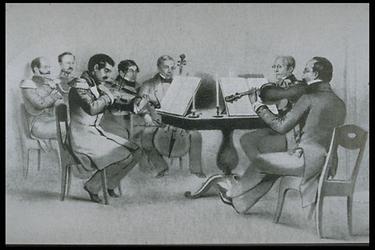 The term String Quartet means first of all the setting for two violins, viola and cello. This gave rise to a new kind of composition: the four voices are equal here (in contrast to the Baroque Trio). Hence the often-quoted comparison with four intelligent people conversing with each other. Originally the string quartet was written for amateur musicians but then turned into one of the most demanding musical forms, which could be performed in a small circle as well as in the concert hall.

The Quartetto in B major by Matthias Georg Monn (1717 - Vienna - 1750) is one of the earliest known works of this compositional form. The two movement form (Adagio-Fuge) is still obviously the expression of musical tradition but the dynamic effects point to the future. (E. Stadler))