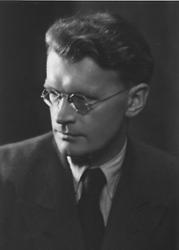 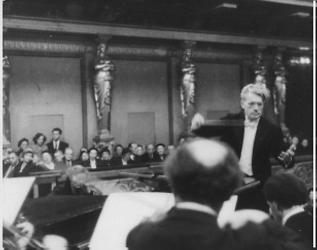 Right from the beginnings of public broadcasting in Austria, the conductor, Max Schoenherr (1903 Marburg/Drau - 1984 Baden bei Vienna), who originally came from the musical theater, was known for his transcriptions of light classical music which remained true to the original while suiting them to realistic performance conditions. As an internationally accepted composer with a reputation for high moral standards because of his attitude towards the Nazis, he was chosen to write a transcription of Mozart's melody for the Austrian National Anthem (Example). His own music tends toward smphonic entertainment; atonality was a problem for him, as an expert on the media. His activities as a young conductor (Fig. a: Max Schoenherr as a young man) covered all musical forms. After WWII, he was sought after mainly for his expert knowledge about light classical music and after retiring, he finished a degree in musicology. Fig. b shows the conductor in the Golden Hall of the Society of the Friends of Music in Vienna (Wiener Musikvereinssaal). (M. Saary)