The following four pictures show excerpts from manuscripts dating from the 12th to the 15th centuries as a means of demonstrating the various kinds of notation in use: 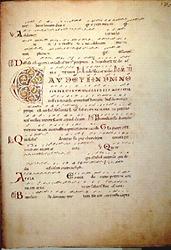 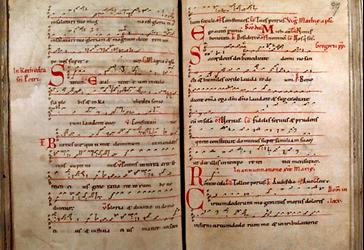 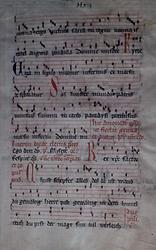 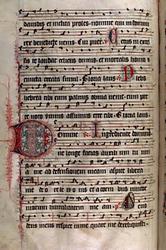 The first example comes from a Graduale of the Antiphonary of St. Peter (written around 1160 in Salzburg). The neumes were written without lines above the text.

The manuscript Graz Codex 807 was written around the year 1160 in St. Nicholaus in Passau. It is one of the most important sources of chant, especially for the so-called German Chant Dialect. This name was introduced for certain characteristic deviations from the Roman chant, which originated around 1100 in Southern German Monasteries and then were wide-spread in Middle Europe. As a means of identifying the tones, Metz neumes were drawn on four lines, of which the f -line was colored red and the c-line yellow.

The scribe Friedrich Rosula used quadratic notation for the manuscript Codex 29 of the University Library Graz. The Codex was written in 1345 in St. Lambrecht. The example shows Christ schepfer alles des da ist, a Middle High German translation of the Latin Hymn Rex Christe. Here we can only see text and musical markings but the Middle High German interpolation consistently employs lovely quadratic notation. The melody is the same as the chant except for several changes required by the text, which is itself only an approximate translation.

This picture shows Codex 9 of the University Library Graz, a Graduale Cisterciense (Cistercian Graduale), which was probably also written for Neuberg an der Mürz. It dates back to the first half of the 15th c. and uses the so-called "Hufnagelnotation" (i.e. horse-nail notation or gothic chant notes). The lower voice is a chant melody but the upper one is newly-composed; both of them however have been given a trope, i.e. a text was set to fit the music. (E. Stadler)


Back to the Austrian Version