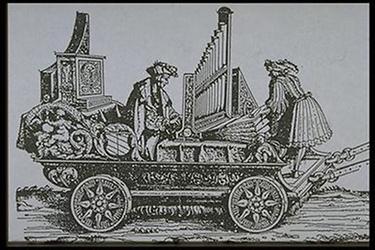 Radstadt/Salzburg - 1537 Salzburg) became the chamber organist of Archduke Sigismund of the Tyrol after his studies. When Sigismund died, his successor Maximilian I took the entire court chapel into his service. Even at that point, it was common to append such praise as der kuenstlichest in allen landen (the most artistic of all the earth) or Qui in universa Germania secundum non habet (He has no equal in all of Germany) to his name. The illustration shows Hofhaimer as the organist of Maximilian I in the Emperor's Triumphzug (Triumphal Procession), a work of art that the ruler, who was particularly concerned about the reputation of his dynasty, had ordered. (E. Stadler)