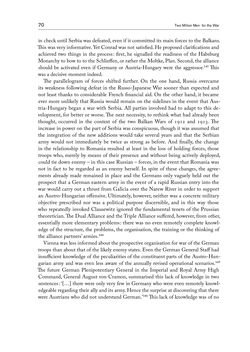 70 Two Million Men for the War in check until Serbia was defeated, even if it committed its main forces to the Balkans. This was very informative. Yet Conrad was not satisfied. He proposed clarifications and achieved two things in the process : first, he signalled the readiness of the Habsburg Monarchy to bow to to the Schlieffen, or rather the Moltke, Plan. Second, the alliance should be activated even if Germany or Austria-Hungary were the aggressor.143 This was a decisive moment indeed. The parallelogram of forces shifted further. On the one hand, Russia overcame its weakness following defeat in the Russo-Japanese War sooner than expected and not least thanks to considerable French financial aid. On the other hand, it became ever more unlikely that Russia would remain on the sidelines in the event that Aus- tria-Hungary began a war with Serbia. All parties involved had to adapt to this de- velopment, for better or worse. The next necessity, to rethink what had already been thought, occurred in the context of the two Balkan Wars of 1912 and 1913. The increase in power on the part of Serbia was conspicuous, though it was assumed that the integration of the new additions would take several years and that the Serbian army would not immediately be twice as strong as before. And finally, the change in the relationship to Romania resulted at least in the loss of holding forces, those troops who, merely by means of their presence and without being actively deployed, could tie down enemy  – in this case Russian  – forces, in the event that Romania was not in fact to be regarded as an enemy herself. In spite of these changes, the agree- ments already made remained in place and the Germans only vaguely held out the prospect that a German eastern army in the event of a rapid Russian entry into the war would carry out a thrust from Galicia over the Narew River in order to support an Austro-Hungarian offensive. Ultimately, however, neither was a concrete military objective prescribed nor was a political purpose discernible, and in this way those who repeatedly invoked Clausewitz ignored the fundamental tenets of the Prussian theoretician. The Dual Alliance and the Triple Alliance suffered, however, from other, essentially more elementary problems : there was no even remotely complete knowl- edge of the structure, the problems, the organisation, the training or the thinking of the alliance partners’ armies.144 Vienna was less informed about the prospective organisation for war of the German troops than about that of the likely enemy states. Even the German General Staff had insufficient knowledge of the peculiarities of the constituent parts of the Austro-Hun- garian army and was even less aware of the annually revised operational scenarios.145 The future German Plenipotentiary General in the Imperial and Royal Army High Command, General August von Cramon, summarised this lack of knowledge in two sentences : ‘[…] there were only very few in Germany who were even remotely knowl- edgeable regarding their ally and its army. Hence the surprise at discovering that there were Austrians who did not understand German.’146 This lack of knowledge was of no
back to the  book THE FIRST WORLD WAR - and the End of the Habsburg Monarchy, 1914 – 1918"
THE FIRST WORLD WAR and the End of the Habsburg Monarchy, 1914 – 1918
Entnommen aus der FWF-E-Book-Library