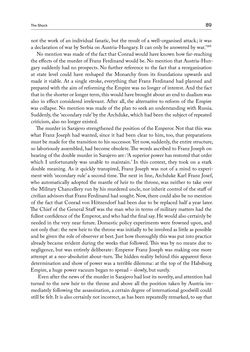 The﻿ Shock 89 not the work of an individual fanatic, but the result of a well-organised attack ; it was a declaration of war by Serbia on Austria-Hungary. It can only be answered by war.’185 No mention was made of the fact that Conrad would have known how far-reaching the effects of the murder of Franz Ferdinand would be. No mention that Austria-Hun- gary suddenly had no prospects. No further reference to the fact that a reorganisation at state level could have reshaped the Monarchy from its foundations upwards and made it viable. At a single stroke, everything that Franz Ferdinand had planned and prepared with the aim of reforming the Empire was no longer of interest. And the fact that in the shorter or longer term, this would have brought about an end to dualism was also in effect considered irrelevant. After all, the alternative to reform of the Empire was collapse. No mention was made of the plan to seek an understanding with Russia. Suddenly, the ‘secondary rule’ by the Archduke, which had been the subject of repeated criticism, also no longer existed. The murder in Sarajevo strengthened the position of the Emperor. Not that this was what Franz Joseph had wanted, since it had been clear to him, too, that preparations must be made for the transition to his successor. Yet now, suddenly, the entire structure, so laboriously assembled, had become obsolete. The words ascribed to Franz Joseph on hearing of the double murder in Sarajevo are : ‘A superior power has restored that order which I unfortunately was unable to maintain.’ In this context, they took on a stark double meaning. As it quickly transpired, Franz Joseph was not of a mind to experi- ment with ‘secondary rule’ a second time. The next in line, Archduke Karl Franz Josef, who automatically adopted the mantle of heir to the throne, was neither to take over the Military Chancellery run by his murdered uncle, nor inherit control of the staff of civilian advisors that Franz Ferdinand had sought. Now, there could also be no mention of the fact that Conrad von Hötzendorf had been due to be replaced half a year later. The Chief of the General Staff was the man who in terms of military matters had the fullest confidence of the Emperor, and who had the final say. He would also certainly be needed in the very near future. Domestic policy experiments were frowned upon, and not only that : the new heir to the throne was initially to be involved as little as possible and be given the role of observer at best. Just how thoroughly this was put into practice already became evident during the weeks that followed. This was by no means due to negligence, but was entirely deliberate : Emperor Franz Joseph was making one more attempt at a neo-absolutist about-turn. The hidden reality behind this apparent fierce determination and show of power was a terrible dilemma : at the top of the Habsburg Empire, a huge power vacuum began to spread  – slowly, but surely. Even after the news of the murder in Sarajevo had lost its novelty, and attention had turned to the new heir to the throne and above all the position taken by Austria im- mediately following the assassination, a certain degree of international goodwill could still be felt. It is also certainly not incorrect, as has been repeatedly remarked, to say that
back to the  book THE FIRST WORLD WAR - and the End of the Habsburg Monarchy, 1914 – 1918"
THE FIRST WORLD WAR and the End of the Habsburg Monarchy, 1914 – 1918
Entnommen aus der FWF-E-Book-Library