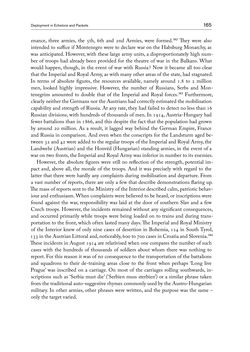 Deployment﻿ in﻿ Echelons﻿ and﻿ Packets 165 enance, three armies, the 5th, 6th and 2nd Armies, were formed.382 They were also intended to suffice if Montenegro were to declare war on the Habsburg Monarchy, as was anticipated. However, with these large army units, a disproportionately high num- ber of troops had already been provided for the theatre of war in the Balkans. What would happen, though, in the event of war with Russia ? Now it became all too clear that the Imperial and Royal Army, as with many other areas of the state, had stagnated. In terms of absolute figures, the resources available, namely around 1.8 to 2 million men, looked highly impressive. However, the number of Russians, Serbs and Mon- tenegrins amounted to double that of the Imperial and Royal forces.383 Furthermore, clearly neither the Germans nor the Austrians had correctly estimated the mobilisation capability and strength of Russia. At any rate, they had failed to detect no less than 16 Russian divisions, with hundreds of thousands of men. In 1914, Austria-Hungary had fewer battalions than in 1866, and this despite the fact that the population had grown by around 20 million. As a result, it lagged way behind the German Empire, France and Russia in comparison. And even when the conscripts for the Landsturm aged be- tween 32 and 42 were added to the regular troops of the Imperial and Royal Army, the Landwehr (Austrian) and the Honvéd (Hungarian) standing armies, in the event of a war on two fronts, the Imperial and Royal Army was inferior in number to its enemies. However, the absolute figures were still no reflection of the strength, potential im- pact and, above all, the morale of the troops. And it was precisely with regard to the latter that there were hardly any complaints during mobilisation and departure. From a vast number of reports, there are only a few that describe demonstrations flaring up. The mass of reports sent to the Ministry of the Interior described calm, patriotic behav- iour and enthusiasm. When complaints were believed to be heard, or inscriptions were found against the war, responsibility was laid at the door of southern Slav and a few Czech troops. However, the incidents remained without any significant consequences, and occurred primarily while troops were being loaded on to trains and during trans- portation to the front, which often lasted many days. The Imperial and Royal Ministry of the Interior knew of only nine cases of desertion in Bohemia, 124 in South Tyrol, 133 in the Austrian Littoral and, noticeably, 600 to 700 cases in Croatia and Slovenia.384 These incidents in August 1914 are relativised when one compares the number of such cases with the hundreds of thousands of soldiers about whom there was nothing to report. For this reason it was of no consequence to the transportation of the battalions and squadrons to their de-training areas close to the front when perhaps ‘Long live Prague’ was inscribed on a carriage. On most of the carriages rolling southwards, in- scriptions such as ‘Serbia must die’ (‘Serbien muss sterbien’) or a similar phrase taken from the traditional auto-suggestive rhymes commonly used by the Austro-Hungarian military. In other armies, other phrases were written, and the purpose was the same  – only the target varied.
back to the  book THE FIRST WORLD WAR - and the End of the Habsburg Monarchy, 1914 – 1918"
THE FIRST WORLD WAR and the End of the Habsburg Monarchy, 1914 – 1918
Entnommen aus der FWF-E-Book-Library