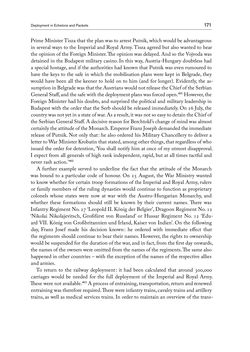 Deployment﻿ in﻿ Echelons﻿ and﻿ Packets 171 Prime Minister Tisza that the plan was to arrest Putnik, which would be advantageous in several ways to the Imperial and Royal Army. Tisza agreed but also wanted to hear the opinion of the Foreign Minister. The opinion was delayed. And so the Vojvoda was detained in the Budapest military casino. In this way, Austria-Hungary doubtless had a special hostage, and if the authorities had known that Putnik was even rumoured to have the keys to the safe in which the mobilisation plans were kept in Belgrade, they would have been all the keener to hold on to him (and for longer). Evidently, the as- sumption in Belgrade was that the Austrians would not release the Chief of the Serbian General Staff, and the safe with the deployment plans was forced open.401 However, the Foreign Minister had his doubts, and surprised the political and military leadership in Budapest with the order that the Serb should be released immediately. On 26 July, the country was not yet in a state of war. As a result, it was not so easy to detain the Chief of the Serbian General Staff. A decisive reason for Berchtold’s change of mind was almost certainly the attitude of the Monarch. Emperor Franz Joseph demanded the immediate release of Putnik. Not only that : he also ordered his Military Chancellery to deliver a letter to War Minister Krobatin that stated, among other things, that regardless of who issued the order for detention, ‘You shall notify him at once of my utmost disapproval. I expect from all generals of high rank independent, rapid, but at all times tactful and never rash action.’402 A further example served to underline the fact that the attitude of the Monarch was bound to a particular code of honour. On 25 August, the War Ministry wanted to know whether for certain troop formations of the Imperial and Royal Army, rulers or family members of the ruling dynasties would continue to function as proprietary colonels whose states were now at war with the Austro-Hungarian Monarchy, and whether these formations should still be known by their current names. There was Infantry Regiment No. 27 ‘Leopold II. König der Belgier’, Dragoon Regiment No. 12 ‘Nikolai Nikolajevitsch, Großfürst von Russland’ or Hussar Regiment No. 12 ‘Edu- ard  VII. König von Großbritannien und Irland, Kaiser von Indien’. On the following day, Franz Josef made his decision known : he ordered with immediate effect that the regiments should continue to bear their names. However, the rights to ownership would be suspended for the duration of the war, and in fact, from the first day onwards, the names of the owners were omitted from the names of the regiments. The same also happened in other countries  – with the exception of the names of the respective allies and armies. To return to the railway deployment : it had been calculated that around 300,000 carriages would be needed for the full deployment of the Imperial and Royal Army. These were not available.403 A process of entraining, transportation, return and renewed entraining was therefore required. There were infantry trains, cavalry trains and artillery trains, as well as medical services trains. In order to maintain an overview of the trans-
back to the  book THE FIRST WORLD WAR - and the End of the Habsburg Monarchy, 1914 – 1918"
THE FIRST WORLD WAR and the End of the Habsburg Monarchy, 1914 – 1918
Entnommen aus der FWF-E-Book-Library