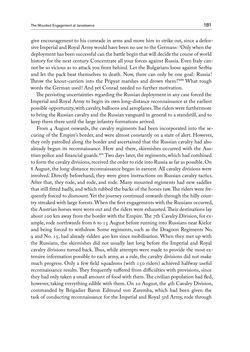 The﻿ Mounted﻿ Engagement﻿ at﻿ Jarosławice 181 give encouragement to his comrade in arms and move him to strike out, since a defen- sive Imperial and Royal Army would have been no use to the Germans : ‘Only when the deployment has been successful can the battle begin that will decide the course of world history for the next century. Concentrate all your forces against Russia. Even Italy can- not be so vicious as to attack you from behind. Let the Bulgarians loose against Serbia and let the pack beat themselves to death. Now, there can only be one goal : Russia ! Throw the knout-carriers into the Pripyat marshes and drown them !’430 What tough words the German used ! And yet Conrad needed no further motivation. The persisting uncertainties regarding the Russian deployment in any case forced the Imperial and Royal Army to begin its own long-distance reconnaissance at the earliest possible opportunity, with cavalry, balloons and aeroplanes. The riders were furthermore to bring the Russian cavalry and the Russian vanguard in general to a standstill, and to keep them there until the large infantry formations arrived. From 4 August onwards, the cavalry regiments had been incorporated into the se- curing of the Empire’s border, and were almost constantly on a state of alert. However, they only patrolled along the border and ascertained that the Russian cavalry had also already begun its reconnaissance. Here and there, skirmishes occurred with the Aus- trian police and financial guards.431 Two days later, the regiments, which had combined to form the cavalry divisions, received the order to ride into Russia as far as possible. On 8 August, the long-distance reconnaissance began in earnest. All cavalry divisions were involved. Directly beforehand, they were given instructions on Russian cavalry tactics. After that, they rode, and rode, and rode. Many mounted regiments had new saddles that still fitted badly, and which rubbed the backs of the horses raw. The riders were fre- quently forced to dismount. Yet the journey continued onwards through the hilly coun- try streaked with large forests. When the first engagements with the Russians occurred, the Austrian horses were worn out and the riders were exhausted. Their destinations lay about 100 km away from the border with the Empire. The 7th Cavalry Division, for ex- ample, rode northwards from 6 to 13 August before running into Russians near Kielce and being forced to withdraw. Some regiments, such as the Dragoon Regiments No. 9 and No. 15, had already ridden 400 km since mobilisation. When they met up with the Russians, the skirmishes did not usually last long before the Imperial and Royal cavalry divisions turned back. Thus, while attempts were made to provide the most ex- tensive information possible to each army, as a rule, the cavalry divisions did not make much progress. Only a few field squadrons (with 150 riders) achieved halfway useful reconnaissance results. They frequently suffered from difficulties with provisions, since they had only taken a small amount of food with them. The civilian population had fled, however, taking everything edible with them. On 20 August, the 4th Cavalry Division, commanded by Brigadier Baron Edmund von Zaremba, which had been given the task of conducting reconnaissance for the Imperial and Royal 3rd Army, rode through
back to the  book THE FIRST WORLD WAR - and the End of the Habsburg Monarchy, 1914 – 1918"
THE FIRST WORLD WAR and the End of the Habsburg Monarchy, 1914 – 1918
Entnommen aus der FWF-E-Book-Library