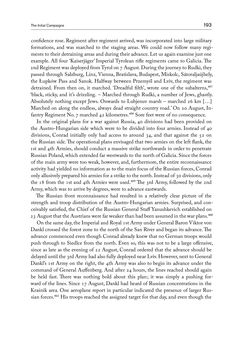 The﻿ Initial﻿ Campaigns 193 confidence rose. Regiment after regiment arrived, was incorporated into large military formations, and was marched to the staging areas. We could now follow many regi- ments to their detraining areas and during their advance. Let us again examine just one example. All four ‘Kaiserjäger’ Imperial Tyrolean rifle regiments came to Galicia. The 2nd Regiment was deployed from Tyrol on 7 August. During the journey to Rudki, they passed through Salzburg, Linz, Vienna, Bratislava, Budapest, Miskolc, Sátoraljaújhely, the Łupków Pass and Sanok. Halfway between Przemyśl and Lviv, the regiment was detrained. From then on, it marched. ‘Dreadful filth’, wrote one of the subalterns,457 ‘black, sticky, and it’s drizzling.  – Marched through Rudki, a number of Jews, ghastly. Absolutely nothing except Jews. Onwards to Lubjenuv marsh  – marched 26 km […] Marched on along the endless, always dead straight country road.’ On 20 August, In- fantry Regiment No. 7 marched 42 kilometres.458 Sore feet were of no consequence. In the original plans for a war against Russia, 40 divisions had been provided on the Austro-Hungarian side which were to be divided into four armies. Instead of 40 divisions, Conrad initially only had access to around 34, and that against the 52 on the Russian side. The operational plans envisaged that two armies on the left flank, the 1st and 4th Armies, should conduct a massive strike northwards in order to penetrate Russian Poland, which extended far westwards to the north of Galicia. Since the forces of the main army were too weak, however, and, furthermore, the entire reconnaissance activity had yielded no information as to the main focus of the Russian forces, Conrad only allusively prepared his armies for a strike to the north. Instead of 30 divisions, only the 18 from the 1st and 4th Armies were used.459 The 3rd Army, followed by the 2nd Army, which was to arrive by degrees, were to advance eastwards. The Russian front reconnaissance had resulted in a relatively clear picture of the strength and troop distribution of the Austro-Hungarian armies. Surprised, and con- ceivably satisfied, the Chief of the Russian General Staff Yanushkevich established on 23 August that the Austrians were far weaker than had been assumed in the war plans.460 On the same day, the Imperial and Royal 1st Army under General Baron Viktor von Dankl crossed the forest zone to the north of the San River and began its advance. The advance commenced even though Conrad already knew that no German troops would push through to Siedlce from the north. Even so, this was not to be a large offensive, since as late as the evening of 22 August, Conrad ordered that the advance should be delayed until the 3rd Army had also fully deployed near Lviv. However, next to General Dankl’s 1st Army on the right, the 4th Army was also to begin its advance under the command of General Auffenberg. And after 24 hours, the lines reached should again be held fast. There was nothing bold about this plan ; it was simply a pushing for- ward of the lines. Since 17 August, Dankl had heard of Russian concentrations in the Kraśnik area. One aeroplane report in particular indicated the presence of larger Rus- sian forces.461 His troops reached the assigned target for that day, and even though the
back to the  book THE FIRST WORLD WAR - and the End of the Habsburg Monarchy, 1914 – 1918"
THE FIRST WORLD WAR and the End of the Habsburg Monarchy, 1914 – 1918
Entnommen aus der FWF-E-Book-Library