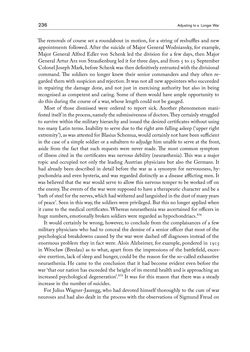 236 Adjusting to a Longer War The removals of course set a roundabout in motion, for a string of reshuffles and new appointments followed. After the suicide of Major General Wodniansky, for example, Major General Alfred Edler von Schenk led the division for a few days, then Major General Artur Arz von Straußenburg led it for three days, and from 5 to 25 September Colonel Joseph Mark, before Schenk was then definitively entrusted with the divisional command. The soldiers no longer knew their senior commanders and they often re- garded them with suspicion and rejection. It was not all new appointees who succeeded in repairing the damage done, and not just in exercising authority but also in being recognised as competent and caring. Some of them would have ample opportunity to do this during the course of a war, whose length could not be gauged. Most of those dismissed were ordered to report sick. Another phenomenon mani- fested itself in the process, namely the submissiveness of doctors. They certainly struggled to survive within the military hierarchy and issued the desired certificates without using too many Latin terms. Inability to serve due to the right arm falling asleep (‘upper right extremity’), as was attested for Blasius Schemua, would certainly not have been sufficient in the case of a simple soldier or a subaltern to adjudge him unable to serve at the front, aside from the fact that such requests were never made. The most common symptom of illness cited in the certificates was nervous debility (neurasthenia). This was a major topic and occupied not only the leading Austrian physicians but also the Germans. It had already been described in detail before the war as a synonym for nervousness, hy- pochondria and even hysteria, and was regarded distinctly as a disease afflicting men. It was believed that the war would serve to allow this nervous temper to be worked off on the enemy. The events of the war were supposed to have a therapeutic character and be a ‘bath of steel for the nerves, which had withered and languished in the dust of many years of peace’. Seen in this way, the soldiers were privileged. But this no longer applied when it came to the medical certificates. Whereas neurasthenia was ascertained for officers in huge numbers, emotionally broken soldiers were regarded as hypochondriacs.574 It would certainly be wrong, however, to conclude from the complaisances of a few military physicians who had to conceal the demise of a senior officer that most of the psychological breakdowns caused by the war were dashed off diagnoses instead of the enormous problem they in fact were. Alois Alzheimer, for example, pondered in 1915 in Wrocław (Breslau) as to what, apart from the impressions of the battlefield, exces- sive exertion, lack of sleep and hunger, could be the reason for the so-called exhaustive neurasthenia. He came to the conclusion that it had become evident even before the war ‘that our nation has exceeded the height of its mental health and is approaching an increased psychological degeneration’.575 It was for this reason that there was a steady increase in the number of suicides. For Julius Wagner-Jauregg, who had devoted himself thoroughly to the cure of war neuroses and had also dealt in the process with the observations of Sigmund Freud on
back to the  book THE FIRST WORLD WAR - and the End of the Habsburg Monarchy, 1914 – 1918"
THE FIRST WORLD WAR and the End of the Habsburg Monarchy, 1914 – 1918
Entnommen aus der FWF-E-Book-Library