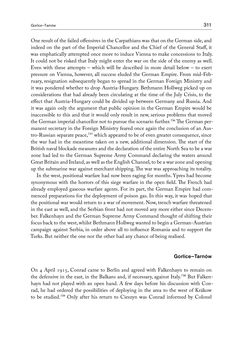 Gorlice–Tarnów 311 One result of the failed offensives in the Carpathians was that on the German side, and indeed on the part of the Imperial Chancellor and the Chief of the General Staff, it was emphatically attempted once more to induce Vienna to make concessions to Italy. It could not be risked that Italy might enter the war on the side of the enemy as well. Even with these attempts  – which will be described in more detail below  – to exert pressure on Vienna, however, all success eluded the German Empire. From mid-Feb- ruary, resignation subsequently began to spread in the German Foreign Ministry and it was pondered whether to drop Austria-Hungary. Bethmann Hollweg picked up on considerations that had already been circulating at the time of the July Crisis, to the effect that Austria-Hungary could be divided up between Germany and Russia. And it was again only the argument that public opinion in the German Empire would be inaccessible to this and that it would only result in new, serious problems that moved the German imperial chancellor not to pursue the scenario further.736 The German per- manent secretary in the Foreign Ministry feared once again the conclusion of an Aus- tro-Russian separate peace,737 which appeared to be of even greater consequence, since the war had in the meantime taken on a new, additional dimension. The start of the British naval blockade measures and the declaration of the entire North Sea to be a war zone had led to the German Supreme Army Command declaring the waters around Great Britain and Ireland, as well as the English Channel, to be a war zone and opening up the submarine war against merchant shipping. The war was approaching its totality. In the west, positional warfare had now been raging for months. Ypres had become synonymous with the horrors of this siege warfare in the open field. The French had already employed gaseous warfare agents. For its part, the German Empire had com- menced preparations for the deployment of poison gas. In this way, it was hoped that the positional war would return to a war of movement. Now, trench warfare threatened in the east as well, and the Serbian front had not moved any more either since Decem- ber. Falkenhayn and the German Supreme Army Command thought of shifting their focus back to the west, whilst Bethmann Hollweg wanted to begin a German-Austrian campaign against Serbia, in order above all to influence Romania and to support the Turks. But neither the one nor the other had any chance of being realised. Gorlice–Tarnów On 4 April 1915, Conrad came to Berlin and agreed with Falkenhayn to remain on the defensive in the east, in the Balkans and, if necessary, against Italy.738 But Falken- hayn had not played with an open hand. A few days before his discussion with Con- rad, he had ordered the possibilities of deploying in the area to the west of Krákow to be studied.739 Only after his return to Cieszyn was Conrad informed by Colonel
back to the  book THE FIRST WORLD WAR - and the End of the Habsburg Monarchy, 1914 – 1918"
THE FIRST WORLD WAR and the End of the Habsburg Monarchy, 1914 – 1918
Entnommen aus der FWF-E-Book-Library